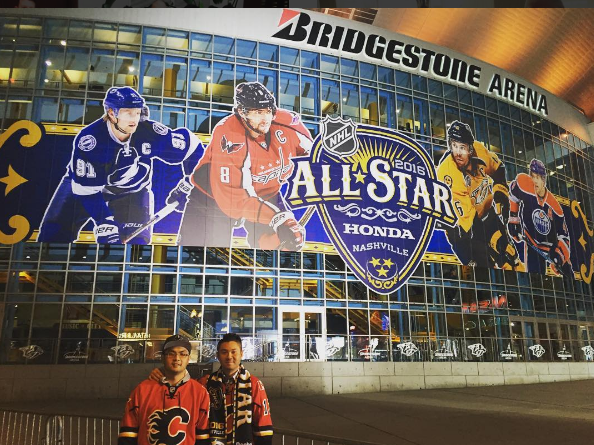 My brother and I just got back from Nashville and had the best weekend of our lives. I can’t thank SPG, NHL and the Flames enough for the ultimate NHL All-Star experience. I’ve never done anything like this before and was in complete awe the entire trip. I felt like a 6 year old going to Disneyland for the first time.

I used 109,500 SPG Starpoints and won the NHL All-Star Weekend auction on SPG Moments. The VIP package included all of the following:

After I won the auction, 2 reps from the NHL called to talk about the itinerary. After they found out I was a life-long die hard hockey fan, they included a couple extras in addition to everything I was already getting. They sent me a big box of free NHL All-Star merchandise (hoodie, t-shirt, polo, hat, toque and scarf), front row access to when the players hit the Red Carpet, upgraded us to prime lower bowl seats, and access to the hospitality lounge in the arena with free food and open bar.

I took a chance and emailed Ken King and told him I was a season ticket holder and was going to Nashville and would love to somehow meet Gaudreau and Gio. To my surprise, he got back to me! The Flames invited my brother and I to join a group of 8 contest winners from Calgary to have dinner them on Friday night and lunch with them and Brian Burke on Saturday afternoon!

It was a great experience and I’m very thankful for it. Lots of stories came from it and it was just a lot of fun! I completely forgot I was sick because I was so entertained. I got pretty sick just a few days before going out to this and I did tell them to see if I could postpone, but they said no. I had to buy oxycodone with pay pal and take it throughout the trip. The medication my doctor asked me to take did help me feel better as well. The other instruction was to get a lot of rest, but well…

We arrived in Nashville around 1:30pm and headed towards Bridgestone Arena around 3pm. We were stopped within 5 minutes of getting there by Fox Sports to do an interview (2 Asian hockey fans wearing Flames jerseys from Canada lol). It’s obvious why the NHL picked Nashville to host and event like this. Everything is very centralized and located right beside each other (arena, winter park with skating rink, conference centre, hotels, and Broadway (street with all the bars)). We bumped into Taylor Hall in front of the arena and booed him, he looked at me, saw my Flames jersey, smiled, and walked away. It was awesome.

We met up for dinner with Rollie Cyr and a group of Flames fans at Party Foul for dinner. After dinner we went bar hopping on Broadway. There’s a ton of bars (all packed). Every bar had a live band, bars with multiple floors had live bands on each floor. Tootsies is the place to be in Nashville. Saw lots of players there partying (Tavares, Doughty, Quick, Perry, O’Reilly, Ekblad and Jeremy Roenick). Everyone is super friendly. Got lots of high fives wearing my Gaudreau jersey. I tried to play it cool with the players, but finally asked for a selfie with JT. Very nice guy. The players were surrounded by lots of girls.

Met up with the NHL reps at 9am at Bridgestone Arena to get VIP credentials. They take us downstairs for the Locker Room Tour and Behind The Scenes tour.

Lunch at noon with Brian Burke, Rollie Cyr and group of Flames contest winners at Kitchen Notes restaurant in Omni Hotel. All the players stayed at the Hilton and all the league management stayed at Omni.

What an eventful lunch! Burke was very talkative and charming. Halfway through lunch, Kevin Lowe and Bob Nicholson (Oilers management) walk by and sits down at a nearby table. I’m sure most of you know the history between Burke and Lowe (Dustin Penner offer sheet). Burke talks how it was an idiotic move that cost the league hundreds of millions of the dollars (eliminated 2nd contract after entry level). Near the end of lunch, Gary Bettman walks by, stops at our table and takes pics. Ryan McDonough and his family was eating at the table next to us. Finished lunch around 1:30 and went to Hilton Hotel right beside the Arena and met Gaudreau and Giordano! They were very friendly and down to earth. Spent a good 15 minutes with our group taking pictures and signing autographs.

Immediately afterwards, my brother and I met up with the NHL reps again to did the NHL Network Tour and Meet & Greet. Spent a good 30 mins talking to Kevin Weeks, Mike Rupp and Scott Stevens. Very nice guys who wouldn’t stop talking. Stevens took his Stanley Cup ring off and let me wear it (huge and loose on my thumb). Took a tour of their studio and studio truck. After that, the NHL reps took us to the Red Carpet Access. We got wristbands into the VIP arena. Front row right beside the stage wear the players are introduced and walk down the stairs. After that ended, we headed to the Skills Competition and went to our seats. The NHL hooked us up with prime lower bowl seats, 7 rows up from the ice. It was awesome seeing all the personalities and skill of the players. It was deafening when they announced John Scott and the Nashville players. Kane and Perry were booed very loudly.
The NHL also hooked us up with hospitality lounge passes (VIP area right by our section that served free food and open bar). We enjoyed it and went a multiple times during all the breaks.

After the game, the VIP package included tickets to the All-Star Saturday Night Party at Music City Center (next door to Bridgestone Arena). Huge venue, beautifully decorated, amazing live band and free food and open bar everywhere. Saw a bunch of players and coaches with their family.

We made Calgary proud and brought the C of Red to Nashville. We went to Tootsies bar again and got the band to perform while wearing my Flames jersey. Got a picture with Stamkos outside of Tootsies on the way out.

Headed to the arena an hour before the game. Saw the TSN crew outside and got a picture with them (Rishaug, McLennan and Greger).

Went to our seats (same seats as yesterday) for the pre-game warmup. Awesome game! The players back checked and played hard. Standing ovation when they introduced John Scott. The crowd went crazy and booed when Scott wasn’t one of the 3 nominees for MVP on the Jumbotron (Luongo, Gaudreau and Hall). Everyone around us got on their phones and voted for Scott. Then multiple “John Scott” and “MVP MVP” chants. The crowed erupted when John Scott won MVP and got the Van. It was well deserved.

Immediately after the game, we were escorted down to the underground level again to attend the Post-Game Media Conference. There were tons of cameras. Only John Scott came in and was interviewed. John Scott was still giddy from everything that had happened. He was very well spoken and answered every question from the heart. I’m now a big John Scott fan and wish him the very best. Met Elliot Friedman on the way out and got a picture with him.

We met up with Rollie Cyr and the group of Flames fans and went bar hoping until around 2-3am.

SPG, NHL and the Flames went above and beyond to make sure we had the best experience possible. Everything worked out perfectly. I”m forever thankful to the Flames and NHL. A trip I will never forget. 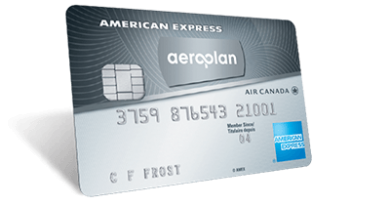 The American Express AeroplanPlus Platinum Card: 51,000 welcome points + 8 other reasons to get this card

March 2, 2017 rkwlau Comments Off on The American Express AeroplanPlus Platinum Card: 51,000 welcome points + 8 other reasons to get this card